It's a year since my lovely Molly went to the Rainbow Bridge. It seems like yesterday. I can still feel the pain, smell her fur, remember how she felt when I held her, still feel her soft muzzle and whiskers when she stood up on her hind legs to give bunny kisses. She was always affectionate  so we knew something was wrong when she stopped doing that a week before she died. She was having trouble breathing so I took her to the vet where the nurse on reception immediately decided she needed oxygen so she took the basket upstairs to put her in the oxygen "hutch". That was the last time I saw her alive.

The vet called a few hours later to say she was OK with oxygen but when they took her out she died. She was very very old. The kind of "Come and see this old rabbit" to all his colleagues old. It was immensely distressing because I hadn't said goodbye. I'd expected she might have to be put down but then I would have been with her, as I was with Dolly. She was whisked away in the vets and I spent months thinking she'd died believing I'd abandoned her. Molly and Dolly were rescued rabbits so we always tried to be careful they never thought we were abandoning them.

Molly was so friendly and intelligent (but thick compared to Dolly ...). It breaks my heart to see rabbits left alone all day in tiny hutches or used as photo props without any thought for their welfare.

Molly and Dolly both lived much longer than we expected and they were a joy. It was a bit barmy two grown-ups getting rabbits but we loved them to bits. We won't have any more as we plan to live in a flat soon. I'd ready and willing to be a bunny Auntie when neighbours go on holiday! In the meantime I still save the last bit of a banana, go to the back door and then remember the bunnies are gone.

This is one of my favourite photos of Molly and I believe "Be yourself" was her mantra. (Quickpage by Connie Prince) 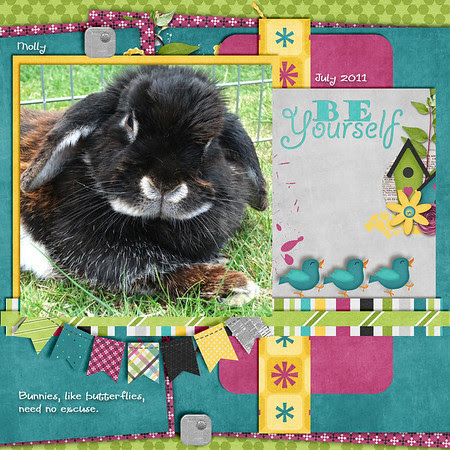 Posted by Sharon Horswill at 06:43