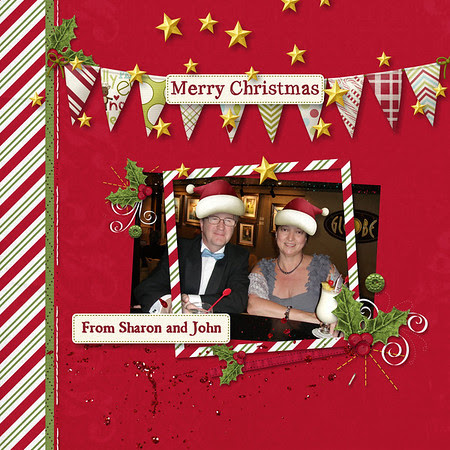 It's pathetic that I haven't used this blog. So here it is attached to my website (a veritable scrapbook fest ...) with a cyber version of the Christmas letter. I don't hold with sending ecards and Facebook messages instead of Christmas cards, though those are fun for "as well as" and I join in. Peeps like to receive Christmas cards and letters and not sending them ignores the lonely and elderly who don't have the internet.

I hope you like the Christmas photo - it was taken on our cruise to the Canaries recently. The hats were added digitally - Santa hats were not part of the formal dress code! You can see the rest of the work-in-progress scrapbook on my website. It was good to get away to warmer weather (thought not as warm as last time we were there) and, more importantly, more hours of daylight. Since I have trouble sleeping and don't get up until late I have great difficulty fitting in the things I need to do in daylight. Sometimes the poor bunny gets her hutch cleaned when it's almost dark. Bunny Molly and cat Sophie are both about 90 in human years and both have health problems. It looks as though we might lose them before long. We lost Dolly this year and it was frightening how upsetting it was to lose a small furry creature we'd only had for a couple of years. I wrote about her HERE.

Mind you, it did come a week after losing Uncle Bill. We had a nightmare journey in horizontal rain and thick fog only to get to the hospital just as he died. It was like losing Dad all over again. Their voices were so similar that talking to Uncle Bill always seemed like a connection to Dad. It was very sad to update the family tree site and watch the black line move slowly over the corner of his photo.

We have more and more members on the family tree site (which is HERE for those who haven't been nagged about it. It's a private site now so that everyone feels comfortable putting photos on there. You just ask to join and if you're obviously family or a genealogist working on our family tree we let you in. Please join!

As many of you will now, Mum had major heart surgery in July, a coronary by-pass and valve replacement. She recovered well but then became very ill due to being allergic to the medication. This set her back a lot but she's beginning to get better again now.

I'll try and remember to add more to this blog. In the meantime there are always lots of new photos and scrapbooks on www.sharonhorswill.com

Have a very Merry Christmas and Happy New Year!

Here's a Smilebox for you (turn speakers up):

Posted by Sharon Horswill at 07:29 No comments:

Mum says, "It hardly needs saying but buying your child a rabbit for Easter is a really dumb, stupid thing to do. Rabbits are not the easy pet people think they are. They can live up to 12 years. They're not easy for a child with small hands to hold. They need lots of space and room to run around and a CLEAN hutch. Anyone who puts rabbits in a small guinea pig hutch and then never cleans it (and I have a neighbour who did that ...) deserves a special place in hell.

Don't do it! Buy chocolate. Even better, teach your child about Jesus so they learn the real meaning of Easter!"

Mum loves this Jesus bloke. I think he probably loved animals too. Apparently His Dad made us all.

Did you know there is a Facebook page for the Make Mine Chococalte campaign? You can join HERE.

Mum made this digital scrapbook page for us bunnies. She says it was made with Libby Weifenbach's Cottontail kit: 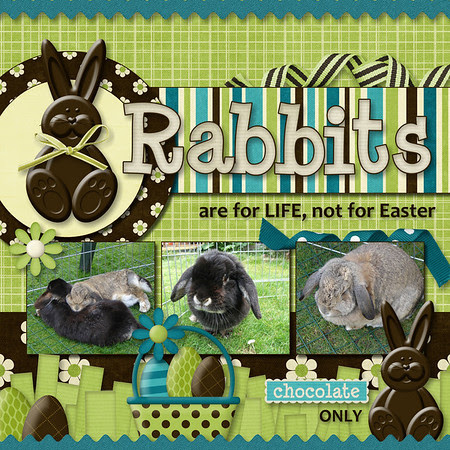 Posted by Sharon Horswill at 06:56 No comments:

Yesterday was Good Friday, the day Christians - whether they are believers or simply subscribe to the traditions - commemorate the day Jesus Christ died on the cross for us. Southampton marked this in a splendid way with an outdoor passion play. We couldn't get to see it since a stupid decision to fight to get onto a cold beach brought back my cough. Instead we sat in the garden and listened to Bob "Warm up man for Jesus" Pearce from a mile away and heard loud Hosannas as the procession went to Jerusalem. It was a wonderful moment I will not forget in a long time. As readers might gather, I am one of the believers.

I was stunned and actually offended when some companies and individuals on Facebook decided to wish people happy Earth Day and ignore Easter entirely. Some silly decision makers in the marketing field thought this was wise. That way they wouldn't offend those who don't celebrate Easter. Is this some kind of sick joke or something more sinister? Birmingham City Council tried to remove Christmas a few years ago and the public were outraged. They also got in trouble with every religious leader in the city.

Why is it that no religious group is to be offended in any way and yet the Christians are fair game? Maybe it's because we're supposed to turn the other cheek. Well, Easter is the time to stand up and be counted, folks! No-one takes that away from us.

Today is St George's Day. St George is the patron saint of England. England is that small country not allowed to have its own National Assembly and its citizens are meant to be meek and quiet and call themselves British and not show national pride.

Sod that for a lark, to use a time honoured English phrase. You can see my English page from my 2011 UK Census scrapbook HERE.

The Daily Telegraph, in its customary tedious and joy killing manner, tells us today is NOT St George's Day in this article. I don't care. That all looks like a good way to lose St George's Day despite the opposite intentions expressed. I'm celebrating St George's Day, along with Shakespeare's birthday, today.

There are, naturally, those who protest that there were no birth records at the time and Shakespeare (Shakspere?) was probably baptised on 23 April and therefore born earlier. No matter. He also died on 23 April. Is it cool or weird to die on your birthday? Cool, I think.

I see that the Lands End Facebook page neatly avoided Good Friday altogether but is celebrating Shakespeare's equally neat Hatch and Despatch. They ask for our favourite work of Shakespeare. I don't have a favourite work, as such, but my favourite words are from Romeo and Juliet:

"Night's candles are burn't out,
and jocund day stands tiptoe on the misty mountain top".

English to make the hairs on the back of your neck stand up.
Posted by Sharon Horswill at 05:59 No comments:

The lovely Dolly had her final trip to the vet's yesterday. We don't know whether it was a spine/nerve problem or kidney failure or just plain old age - she was about 90 in human years - but she'd been getting thinner and thinner and had trouble with her back legs. She was reprieved by the vet on Monday and sent home with painkillers but yesterday I put her in the run with Molly to enjoy some winter sunshine (Dolly loved the sun as long as it wasn't too hot) and she could barely walk. She was dragging herself round in circles with her front legs and it was a pitiful sight.

Although not a great fan of being held, she waited quietly with her head resting on my shoulder and once again the sun shone through the window as the vet was explaining what would happen and Dolly lifed up her tiny face to catch the afternoon rays. When her time came she lay quietly in my arms and passed away very quickly. The nice kind lady vet checked the awful final lack of a heartbeat with her stethoscope and said "She's gone".

I'd forced myself not to cry and and to stay calm for Dolly's sake (and John had been sent out of the room). No animal, or human for that matter, should die in fear picking up on the stress of the one holding her. But when the vet pronounced, be it ever so gently, that she was dead I grabbed her and held her up to my face and sobbed before we laid her on the table, her eyes open and her little legs twitching in a reflex movement as the vet warned they would. I'd never seen an animal die before. Until a week ago when my Great Uncle Bill passed away I'd never seen a human die either. Not a good week.

We'd declined the offer of a private cremation with her ashes returned to us and didn't want to bring her home for burial as it would have been difficult without Molly and our cat Sophie seeing what we were doing. Anyway one day she would have been dug up by someone laying a patio. Her body was left for the vet to arrange her "return to the elements" as they said eloquently at my Dad's funeral. Funny how one death brings them all back.

Dolly then had the current fashionable memorial of being in pride of place in my Facebook profile photo (Uncle Bill's photo taking pride of place in the 1911 Census Group since he was the oldest member of our family tree). My dear Facebook friends - "name" cousins (we don't know each other but we know we're family), those with the same hobbies, fellow marketers, all together in mourning a little tiny furry creature. Those friends are a blessing.

Dolly did not have a good life before she was adopted by us in July 2008. Hints of it were enough for me to cover my ears when the rescue centre talked about it. But then she had "the life of Riley" as my Mum put it. She changed from a shy frightened animal into a real sweetheart. Not quite so free with the kisses as Molly, who's a Chav Bunny, but they were very precious when you got them.

So where is she now? Whilst I'm certain of my place in heaven when I die I can't be sure where animals go. I can't believe they have no soul and there's nothing. Why would God create such beautiful creatures if they meant nothing to Him? When my Uncle Bill died the usual claptrap began. The kind of claptrap spouted by those who believe there is "something out there" and the offend that something on a daily basis. "You saw the shadow of death come for him" "Frieda [his wife] was there". Drivel. So now I'm going to add to the drivel with an observation about Dolly.

I walked back from the shops yesterday feeling like my heart had been ripped out and stamped on. The moon was just coming up and it was the biggest, brightest (almost) full moon I've ever seen. It was as if Dolly was saying "It's alright Mum. I'm OK now" Who knows? 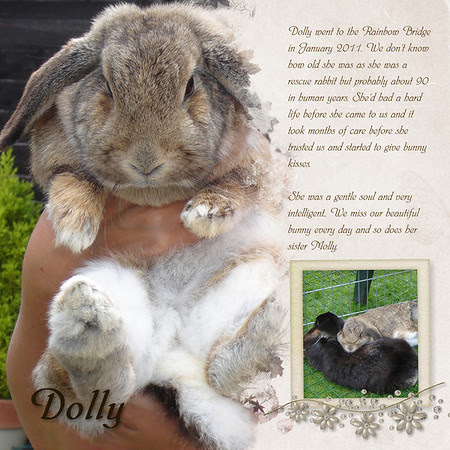 Posted by Sharon Horswill at 07:25 No comments: